WHY WE LOVE DETECTIVE COMICS

They do this every once in a while. When they have anniversaries.

Every five years or so.

They throw together an anniversary issue!

We'll be looking at this:

Detective Comics #572 is a double-sized comic book with a single story split up into several chapters, each featuring a protagonist who had starred in Detective Comics in the past. (Except for one chapter set at the end of the Victorian era. It stars the greatest detective of all - Sherlock Holmes! - and it has some very nice art by E.R. Cruz.)

It starts with Slam Bradley, who, after all, starred in the very first issue of Detective Comics, back in 1937, way back in the very beginning when the series could have just as easily been called Anti-Asian Adventures. The other featured characters are The Elongated Man (Sue is nowhere to be seen; that's my one quibble with Detective #572 because Ralph without Sue is missing the point) and Batman and Robin. It's written by Mike W. Barr. The art is provided by Alan Davis, Terry Beatty, Dick Giordano, Carmine Infantino, Al Vey and Paul Neary. Dick Sprang (oh, the glorious Dick Sprang) was coaxed out of retirement to provide a lovely centerpiece.

Here's some of the nifty Davis/Neary art: 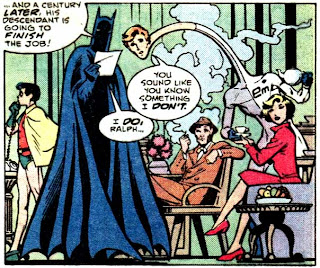 You know Batman and Robin. (I hope.) The Elongated Man is the stretchy one in the awful, awful, awful costume. That's Slam Bradley in the fedora. And the girl is not Sue. She's some bird they met in London.

I don't want to ruin it for you. This is from a very good - but also very short - period in the life of Detective Comics. This issue is not too hard to find, and it's well worth the minor trouble it would take to track it down.

The bad ones are fun, but the good ones are a major reason why we love Detective Comics.