I decided to take a little break from the wonders of Detective Comics #500 to say a few words about the conclusion to the Elongated Man story in #456. The cover of #457 looks like this: 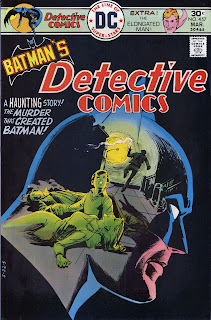 The Batman story, "There Is No Hope in Crime Alley," is something of a minor classic, written by Denny O'Neil and drawn by Dick Giordano. The Elongated Man story is ... well, it's a classic of its kind. Like Part One in the previous issue, it's drawn by Kurt Schaffenberger, so you get some awesome art, like this:

As you recall from the first part, Ralph Dibny (The Elongated Man) had been captured by a group of mink -coat thieves led by a blonde with thick, black eyebrows who wears hot pants. The reason Ralph was captured was because he lost his powers because he had neglected to drink the soda pop - called Gingold - that gives him his stretchy powers. And the reason he got distracted and didn't drink his power-bestowing soda pop was that his wife Sue was all upset because she hadn't been listed among the Women of the Year along with Joan Jett and Margaret Thatcher and Twiggy and whoever else was on the list in the 1970s and she was ranting in the hotel room in a nightie. (And Sue can be very distracting when she's drawn by Kurt Schaffenberger.)

It's Sue to the rescue! The gang has sent a note to Sue, telling her to bring the secret of Ralph's stretchy powers to them so they can become a gang of "rubbery rogues"! Sue shows up, dressed as Elongated Sue, and gives them some rubber tree bark. It's a trick, of course, but they eat it and wait for the powers to kick in. (They'll be waiting a long time! That Sue is a sneak!) They lock her in a room right above Ralph, but she uses a nail file to make a hole in the floor and she pours the soda pop in the hole and Ralph licks up the drops, gets his powers back and saves the day! And Sue lends a hand by stretching her arm and grabbing the blonde in the hot pants by the hair and bringing her to justice.

Sue is allergic to the soda pop, but she managed to copy Ralph's powers with accordion arms and collapsible stilts. (What a freak!) And the story ends with Ralph showing Sue that there's been another poll, this time about the ten most admired couples, and the Dibnys are ranked third, between Paul Newman and Joanne Woodward and David and Julie Eisenhower.

So, the Dibnys do pretty well in the DC Universe. For a couple of FREAKS!!