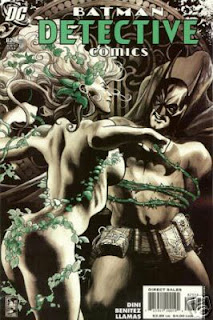 And they're not all completely black and white. Sometimes they had one color. Like in this one! Because the villainess is Poison Ivy, they livened it up with a little green.

This is Detective Comics #823, with a cover date of November 2006. I like the cover a lot. I don't think too much of the story. It's definitely not one of the better Poison Ivy stories. I intend to write up a special entry for Poison Ivy at some point in the future, kind of like the one I wrote for the Riddler a few months ago. But it won't be this story, so we won't be seeing this cover. So this is as good place for it as any.

I don't really know how I feel about the black and white covers. I don't have all of them. Up until a few weeks ago, I didn't have any of them. So far, I feel like this period is a bit weak for Detective Comics. But I just read the Zatanna story and I liked that one. And I also kind of like what they were doing with The Riddler in these issues. (He's been cured of his criminal tendencies and he's been released from Arkham. He's some kind of a weird, flashy private investigator, not very highly thought of because he's such a self-serving publicity seeker. I don't know how it turned out.)

It's kind of a mixed bag. Maybe I'll feel differently when I've read more of them.