"Riddle of the Sleepytime Taxi"

I wasn't sure last week's post really put it across as effectively as possible that the Dibnys are a couple of freaks.

I also didn't provide any examples of Murphy Anderson as artist on Ralph and Sue.

So I decided to make a Part Two and go into a little more detail on one particular story that's been gnawing at my mind for years.

Unfortunately, I couldn't find any art on the Web for this particular masterpiece. Very disappointing. If you want to track it down, it's "Riddle of the Sleepytime Taxi," from Detective Comics #359, with a cover date of January 1967. It's probably not that hard to find, but it may be a little expensive because it's the first appearance of the Barbara Gordon incarnation of Batgirl! However, "Riddle of the Sleepytime Taxi" has been reprinted several times, so it shouldn't be too hard to track down. 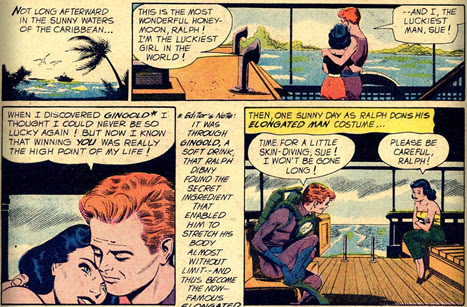 They appear to be on their honeymoon.

"Riddle of the Sleepytime Taxi" start with a splash page of Ralph tackling a bunch of crooks in a garage by snaking his body through three tires and swinging his torso around to smack the bad guys with the tires. Says Ralph:

I'll bet a can of lubricating grease they're pretty TIRED of the whole affair right about now!

Get it? Tired? Because he's hitting them with tires?

It seems that Ralph and Sue are visiting Chestnut City and they are on their way to a costume party. Ralph is dressed as a "Gay Nineties Cop" and Sue is dressed as a ... Well, some might guess "Harem Girl," but Sue seems pretty convinced that she is a "Maharanee." My best guess is that Sue thinks a "Maharanee" is the female equivalent of a "Maharajah." She may be right. I'm certainly no expert on such things.

Whatever Sue is supposed to be, she rocks this outfit! Wow! That's why it's so TRAGIC that I couldn't find any of the Murphy Anderson art. Sue is all decked out in silk and veils and she looks kind of like a belly dancer. I don't know if she is a "Maharanee," but if she is, she rocks it!

Ralph flags down a cab with a hand stretched to the size of a circus tent, but the driver doesn't want to take them anywhere. A cop fortuitously standing nearby tells the driver that it's the LAW! If his flag is up, the driver has to accept the Dibnys as passengers.

This is where Sue says:

Ralph ... I still say I should have a jewel for the middle of my forehead to make my maharanee costume authentic!

and Ralph yawns ... and the next thing they know, it's an hour later and they're in front of the Miramar Hotel. It seems they both fell asleep in the middle of Sue's observation that she needs a jewel on her face.

And Ralph smells a mystery! He realizes that they're not in the same cab they started in because the red and black checkerboard on the taxi is the opposite! (We're on page three, so we're way past the point where you start saying, "Wha -!? That's a little far-fetched!")

And Ralph is off! He hands his "Gay Nineties Cop" outfit to Sue and disappears down the street with 30-foot strides! And Sue says:

Wouldn't you know it! He's a hundred times faster getting OUT of his clothes than he is getting INTO them!

Yeah, I'm not surprised Ralph can get his clothes off fast. I mean, look at Sue! She is rockin' that outfit!

Anyway, Ralph quickly spots the taxi from his vantage point way above the streets and he trails it to a garage where he sees the crooks unloading a sleeping victim from the back of the taxi. It's a diplomat from India with important papers. It seems the bad guys are targeting diplomats - Chestnut City is crawling with diplomats, I guess - knocking them out with sleeping gas in the backs of the taxis, removing the important papers, photographing them, replacing them and then selling the copies of the papers to hostile foreign powers. When the victim is dropped off, he thinks he just dozed off and, if he notices how long it took to go four blocks, the cab driver just says it's that awful Chestnut City traffic.

Ralph takes care of this bunch pretty quick. He knocks a guy into a stack of oil cans and says:

You've had your chance! Dat's oil you get!

Then he knocks a guy down with the air hose and says:

And then he tosses a guy into the automatic car wash and says:

You and your dirty scheme are all washed up!

After eight pages, he runs out of puns and finishes off the bad guys. But the diplomat from India is very grateful and he gives Ralph a jewel to give to Sue. The last panel shows Sue, still dressed up as a maharanee, with the jewel on her forehead!

The least I can do -- in the interests of international peace and good will -- is to accept it!

Oh, those Dibnys! What a couple of freaks!