When it comes to the creative people on Batman, we hear a lot about people like Dennis O'Neil, Bob Kane, Marshall Rogers, Jerry Robinson, Neal Adams, Bill Finger, Frank Miller, Steve Englehart, Don Newton and many others.

But Frank Robbins ... well, he's not completely unknown, but he wrote Detective Comics for a long time. He wrote most of the issues between 1968 and 1973. He wrote the lead feature - Batman - and he wrote backup stories for Batgirl and Jason Bard.

He wrote all the early Man-Bat stories! He wrote the "Barbara Gordon runs for Congress" issues!

"The Gal Most Likely To Be - Batman's Widow!" THAT was  Frank Robbins!

So it's quite a run, and I think he should get a little more credit. Hence, this post, my first Batman Friday post devoted to a creator.

I love these stories! The pacing sometimes seems off to the modern comic book reader, but that's because there were no continued stories and, in addition, There were two stories - and sometimes more - in every issue. So that means the writer had to do EVERYTHING in 16 or fewer pages. Introduce the main characters and the main plot elements, develop the plot threads, and bring it all together in a satisfying conclusion - Frank Robbins did it every time.

It does take a little getting used to, I admit, but only a little, and eventually you realize that you are privileged to be able to read Frank Robbins' Batman. (I always imagine that, when he's involved in a long and complicated caper involving the Joker or R'as al Ghul, Batman takes a break by slipping into a Frank Robbins story. Just for the boost he must get from the sense of accomplishment he feels when he solves a case in a mere 15 pages.)

And Frank Robbins was also an artist. He drew comic strips going back all the way to the late 1930s. He's probably most famous for drawing "The Invaders" - which was one crazy comic, as I recall - and he also drew Captain America for a a time, a run that includes one of my favorite Red Skull storylines (#184 to #186).

He didn't draw Batman very often, though. But he did draw a few, including the Man-Bat story in Detective Comics #429. Here's the cover (drawn by the amazing Nick Cardy, not by the amazing Frank Robbins):

And here's the splash page, definitely by Frank Robbins:

Let's see. What crazy-ass crap is going down in this story, titled "Man-Bat Over Vegas!" Hmm.

There's a series of vampire attacks in Las Vegas. Batman suspects that the Langstroms - those crazy Langstroms! - are involved. So off he goes to Las Vegas.

(Perhaps I should mention, for the uninitiated, that the Langstroms are Kirk and Francine. They've both imbibed of the serum that turns people into man-sized bats. (But not into vampires, per se.) And they are in the Southwest studying bats, and that's why Batman is suspicious.) 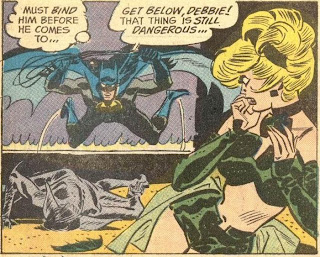 So Batman hires a showgirl to stand on the roof at the "Aces-Hi" skytop cabaret to act as bait for the "vampire." And it works within about four panels! The man-sized bat attacks and Batman mixes it up with the creature for a few pages. The Man-Bat escapes and Batman follows in a helicopter. And the key moment is when he finds a Band-Aid stuck to his glove. (???????)

From there, we quickly roll to the conclusion.

SPOILER ALERT!! Story's big twist about to be revealed ahead!

It's not Kirk! It's Francine! She was bitten by a vampire bat while studying them in the Southwest. (Vampire bats don't usually venture this far north, but these are special vampire bats. This seeming mistake is addressed in the story.) The bite of the vampire bat somehow interacted with the Man-Bat serum in Francine's blood and she turned into a blood-sucking, man-hunting, giant bat during the full moon.

Batman and Kirk subdue Francine and the story ends with them taking her to a hospital for a full blood transfusion.

Those Langstroms are a couple of FREAKS! Even the Dibnys shun them.

I hate to imagine what would happen if the Langstroms ever had a baby! Oh, wait! I don't have to imagine it! It happened! Perhaps I will start off the new year with a post on that particular story. (It happened in Detective Comics.)

Frank Robbins did not write Batman much longer after the "Man-Bat Over Vegas!" story. Detective Comics #436 would be his last issue. But he had done his part with several years' worth of entertaining short stories about Batman.

I like to think of him as the James Thurber of Batman writers.

Frank Robbins is definitely one of the reason why we love Detective Comics.

(I guess I should call this "Part One" because there are lots of weird dudes in Strange Tales.)

PART ONE: Nebulos and The Living Tribunal

I recently got some issues of Strange Tales from the late 1960s and, man, let me tell you, there are some weird dudes roaming these pages.

Specifically, I got Strange Tales #162 and #163, from 1967. Yeah, you're right, a comic book called Strange Tales might be expected to have some weird dudes running around within its pages, but I long ago got used to fellows like Baron Mordo and Nightmare and Dormammu. I guess I was so young when I first read reprints of the Ditko-drawn Doctor Strange stories that these dudes never seemed weird to me.

(And I'm not even going to get into the Nick Fury, Agent of S.H.I.E.L.D., series by Jim Steranko. Not just yet. Another time. Plenty of weird dudes running around there, too.)

Just look at this dude:

That's Nebulos. What is his deal?

Well, he calls himself the Lord of the Planets Perilous. And he seems to have kidnapped Victoria Bentley for reasons I'm not entirely clear on. (Who's Victoria Bentley? you may be wondering. That's a good question.) Nebulos has some undetermined sinister plans that involve Earth, and he says things like:

Seek not to command Nebulos -- for, no mere human may question my immortal will!

(He's kind of full of himself, and he's also kind of a douche.)

Nebulos sends Doctor Strange off to fight Baron Mordo for some reason.

(I should add that's it's all beautifully drawn by Dan Adkins.)

Doctor Strange beats Mordo and ends up back on the World of the Million Perils where Nebulos acts like a big jerk who thinks he knows everything. But he's just about to run into another weird dude, and Nebulos may soon learn that he's just not all that hot.

Look! Out of the vast darkness of space, he comes even now -- the three-visaged, remorseless --
LIVING TRIBUNAL!!

And the issue ends and you have to wait until the next issue to see The Living Tribunal. (You can't miss him. He's the weird dude with three faces on a single head.)

(And he's got a sun on his chest and his head floats above his body and, you know. The usual.)

Question NOT my infinite wisdom, rash mortal, lest ye PROVOKE my wrath anew!

And he gets into a big fight with Nebulos.

It's a little complicated. Doctor Strange can't just sit back and let it play out because Nebulos is the only one who knows where Victoria Bentley is. So he gets involved on the side of Nebulos, which irks The Living Tribunal, who is not a guy you want to irk unless you have a good reason.

Well, The Living Tribunal knocks a mountain on Nebulos and kills him. (And Nebulos hasn't been seen since.)

The Living Tribunal blasts Doctor Strange with a yellow ray and says:

Thus I send you now -- with the speed of thought -- to that terrifying world where Nebulos did imprison the Earth girl!

And that's where it ends as Doctor Strange travels to yet another strange world where he will - presumably - meet more weird dudes.

But you'll have to wait until I get the next issue to find out more about the next batch of weird dudes.