While they were putting together Detective Comics #500, some editor said, "Hey! Let's get all the non-super-hero detectives from Detetcive Comics and  put them in one story!" And somebody said, "OK," and they assembled a team of non-super-hero detectives and crammed them into a 13-page story written by Len Wein and drawn by Jim Aparo. (Whatever else you may say about this story, it does have Aparo art.)

So here's our line-up. (See if you can guess which one I made up.)

Did you guess which one I made up? I admit. It's a trick question. I didn't make any of them up! These guys are all real characters from the DC Universe!

This is as good a place as any to offer up a little history on these colorful characters who span the first thirty-plus years of Detective Comics. First up, Slam Bradley, who, after all, was in the very first issue back in 1937. (That's right; he appeared in comic books before Superman!)

Slam Bradley was created by Jerry Siegel and Joe Shuster. (Where have I heard those names before?) He appeared in Detective until about #80 (in 1943) and returned later in the 1940s (from around #120 to #150). And he still shows up from time to time. In his earliest appearance, he was a two-fisted private investigator who seemed a lot more interested in beating the information out of somebody than by doing any detective work. In his first appearance, he may seem very racist because of the attitudes expressed towards Asians, but the thing about Detective Comics #1 is that the whole comic book is like that. It should probably be called Anti-Asian Comics instead of Detective Comics. So modern-day Slam Bradley shouldn't be judged too harshly just because 1937 Slam Bradley was a racist dick. 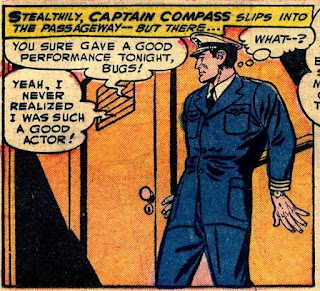 Next, if we're going by publication dates of first appearances, is Captain Compass, who first appeared in 1948 in, of all place, Star-Spangled Comics. He eventually moved over to Detective in 1954, beginning with #203, and lasted to #224. I don't know much about him. I guess he solved mysteries on boats or something.

Maybe they were trying to make up for the somewhat objectional tone of the first issue when they published Pow-Wow Smith, Indian Lawman, starting in #151. I guess their hearts were in the right place. He keeps the peace on a Sioux reservation in Red Deer Valley, I guess. I don't know too much about him, either. He lasted in Detective until #202 in 1953 when he moved over to Western Comics, where he had a respectable run.

Next on the list is Roy Raymond, TV Detective. He first appeared in Detective Comics #153 in 1949. He appeared every month until Detective #292 in 1961 and, like Bradley, he shows up from time to time. He had a TV show called "Impossible - But True!" and he was good at solving mysteries and uncovering hoaxes. He may have been way ahead of his time because I can totally see him today hosting some dopey series about "Famous Hoaxes" on The History Channel.

Then there's Mysto the Magician Detective, who first appeared in Detective #203 in 1954. He appeared until #212 - that's 10 times! - and his only other appearance was Detective Comics #500. I never heard of this guy until I got #500. Not only do I not know much about him, even Roy Thomas never considered bringing him back! (That's obscure!)

Jason Bard was a wounded Vietnam veteran who became a private detective at the end of the 1960s. He first appeared in the Batgirl backup story in Detective Comics #392, cover-dated October 1969. He dated Barbara Gordon and had his own sporadic backup feature in Detective in the 1970s.

Which brings us to Christopher Chance, The Human Target, who's not really a detective, as far as I can see. He dresses up as his client until somebody tries to kill him (thinking he's the client) and then he catches the would-be assassin. (Or something.) It sounds silly, but this is actually a very profitable profession in the DC Universe. He first appeared in Action #419 in 1972. His series in Action was short-lived, but his series in Detective was even shorter-lived - four issues! - and had ended just a few issues prior to his appearance in #500.

So these guys are at a dinner for an old detective - he's even older than Slam Bradley! - who's retiring and the old dude is murdered before their eyes and they have to solve it. It's a bit much, cramming these guys into 13 pages. They solve the mystery, but only because Roy Raymond, TV Detective, is such a bad-ass.

This story's not the worst story I've ever read in a comic book. (It's not even the worst story in this issue! Trust me. We'll get to that!) But it's kind of silly. It may be a classic of its kind. This kind of writing - restricted by editorial rules, short page counts and the inherent limits of genre writing - is just too easy to judge harshly. So let's not be too harsh on Len Wein.

Artist Jim Aparo is the one who makes it look easy!